The most frequent questions asked about the G.R.E.A.T. Program are “Is G.R.E.A.T. effective?” and “How do you know if it works?” G.R.E.A.T. is a rarity among youth violence and gang prevention and intervention programs in that it has been subjected to rigorous scientific evaluation and has data to demonstrate that it has a measurable impact on the attitudes and decisions of students who complete the G.R.E.A.T. lessons. Recently, there has been increasing demand from public policymakers for implementation and dissemination of “evidence-based” practices, yet there has been a surprising lack of quality research on promising or effective gang programs. The G.R.E.A.T. Program is an exception.

G.R.E.A.T.’s core middle school curriculum was the focus of a rigorous, long-term, multisite evaluation. Commissioned by the National Institute of Justice, the national evaluation of the G.R.E.A.T. Program was initiated in 2006 and concluded in 2012. This evaluation was a follow-up to an earlier study (1995−2000) that returned promising but inconclusive results and led to a rigorous programmatic review that resulted in substantial program and curriculum modifications. The second study followed students who received the revamped curriculum and was designed to determine whether the modified program would produce measurably improved results.

Utilizing a field trial, this study assigned classrooms randomly to treatment and control conditions at 31 schools in seven geographically and demographically diverse cities representing a cross-section of the United States. Results of the latest study, which concluded in the spring of 2012, have been published in peer-reviewed professional journals, and the investigators have released reports providing data and analysis of the full study.

The investigators concluded: “Our multicomponent evaluation found that the G.R.E.A.T. Program is implemented as it is intended and has the intended program effects on youth gang membership and on a number of risk factors and social skills thought to be associated with gang membership. Results one year post-program showed a 39% reduction in odds of gang joining among students who received the Program compared to those who did not and an average of 24% reduction in odds of gang joining across the four years post-program.”[2]

In the search for “what works,” it is equally important to understand how and why interventions are successful. A substantial body of research indicates that lack of program fidelity—rather than failure of the program design—is one of the primary explanations for the failure of prevention programs [3]. Without evidence that a program has been implemented properly, it is difficult to determine whether a program “works,” or meets its intended goals. In addition to measuring outcomes, the national evaluation of the G.R.E.A.T. Program utilized multimodal process evaluations to measure Program fidelity, among other factors. Investigators concluded that “the G.R.E.A.T. Program was implemented with fidelity in the vast majority of classrooms . . . thereby providing confidence in outcome results.” [4] This high degree of fidelity is attributed to the success of the instructor training program and the level of instructor commitment to the G.R.E.A.T. Program and also has positive implications for the capability to successfully replicate the Program in multiple settings.

The process evaluation also included comprehensive surveys of teachers and school administrators to measure their responses to the Program. Surveys of school personnel found that:

The instructing officers also expressed strong support for the Program, stating that it improved their relationships with the children, the school, and the community as a whole. 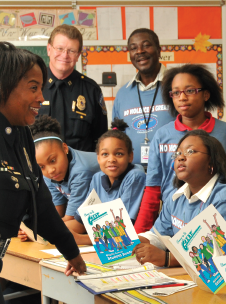